One of the great things about the dump is that people leave magazines they are done with.  Those suckers are not cheap, and I always feel a little guilty just throwing them away when I'm done with them, so when I see a magazine there that I would generally want to read, I grab it.  A few weeks ago I scored a stack of old Marthas, some Real Simples, and some Cooking Lights, including an all-star recipe edition.  In that last one was a recipe for Cheddar Chive Waffles.  YUM.  The recipe wasn't too involved, but it called for potato pancake mix as the base and try as I did to find it, it just wasn't happening.  So I modified.

I started with the basic Bisquick waffle recipe, found on the back of the box.  (I have definitely been giving my pantry a kick in the butt as far as packaged foods go, but have yet to shirk the Bisquick.  I'm trying.  More on that tomorrow.)  Once that was mixed together I added 1/4 cup of sour cream, about 1/4-1/2 cup shredded cheddar cheese, and enough chopped fresh chives that I could see them all throughout the mix.  Make them as usual in your waffle maker and they're done.  They are so so so good.  They are actually listed in Cooking Light as an alternative side dish for soup, but they are fabulous with syrup on them alongside eggs and bacon.  I would know- I made them Friday night for supper hoping for Saturday breakfast leftovers, but there were none left.  Enjoy! 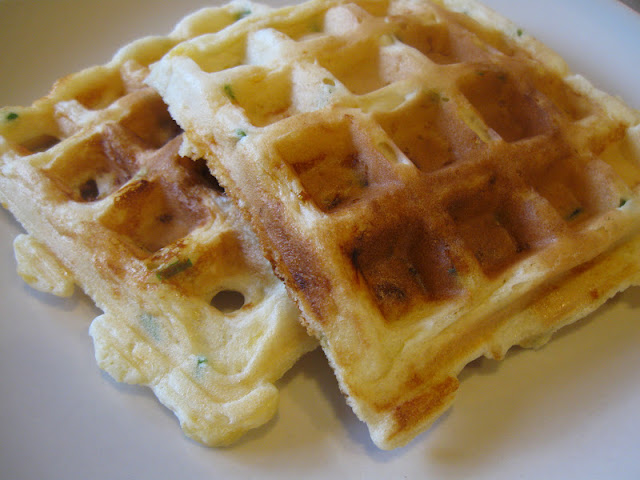