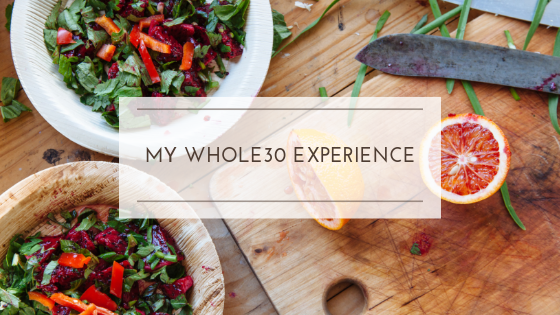 Last January my husband and I decided to try the Whole30.

Well, more like the November before last January we decided to try the Whole30 and then in January we started.  I wasn't about to try and eat really strictly for the first time ever through the holiday season - talk about setting yourself up for failure.  We decided to do the 30 days as written and see how we felt at the end before deciding anything beyond that.  Throughout the month, and then as we continued after, I got a lot of questions from people, mainly when I was at an occasion that involved food, so I thought that in starting a second round yesterday I'd tell you about my experience and answer some of those questions.

What made you decide to do Whole30?

As I talked about in yesterday's post, I had gained weight over the prior three years while taking some medication and after switching needed something to help jumpstart the loss of the last half of those pounds.  I had seen several celebrities talking about Whole30 on Instagram (clearly I do thorough, scientific research on these things) and decided to check the book out of the library to see what the deal was with this program.  I was just planning on reading it and stewing on it for awhile but my husband picked it up and started reading and decided we needed to do it, like a science experiment, and see what happens.  So while he was ready to start right then in mid-November, I pushed him off until January 1.

No, you can't eat sugar, but it's much more restrictive than that.  The Whole30 is considered a system reset.  You eliminate the most common trigger foods and allow your system to sort of re-normalize, and then after 30 days you can add foods back in to see how you feel and how it affects your body.  You are not supposed to consume sugar (including foods that have sugar in them.  This is the hardest!  There is sugar in everything and you don't even realize it.), alcohol (including use in cooking), grains (including cereal, oatmeal, rice, pasta), beans (including peanuts and peanut butter), all dairy, some nuts, and fruit juice (except for making sauces), plus limit overall fruit intake.

Lots of meat and eggs, avocados, salads, cauliflower rice, zucchini noodles, all the veggies, plus I was eating a banana with almond butter and/or an apple with cashew butter every day.  Once you get started and try making meals - and the book has lots of recipes plus there is a whole recipe-sharing community on Instagram - you can find a lot of great dishes to make and substitutes that work in your existing recipes.

It's not hard but it does help if you do some planning.  I ended up going to the grocery store a lot more than usual because I needed fresh ingredients, or I would find a recipe with a substitute I didn't have.  It helped to make sure I had things we could eat on-hand (so, like, buying 2 ripe avocados and 2 not-quite-ripe ones at the same time so we'd always have a couple ready), and sourcing some good snacks ideas also helped.  It's more getting out of the comfortable and familiar eating groove and making your mind do some work.

Can you eat out?

Yup, we ate out a couple times in different situations.  If we were going to a party, I'd simply bring something we knew we could eat just in case, and if we were going out, we'd either tell friends we needed to eat somewhere that had something on the menu that worked (so no pizza or sushi) or we'd scour the menus beforehand to find something that fit the bill.  On a couple occasions I brought something with me to a restaurant: tuna salad + avocado went to Panera's, a small cup of Tupperware of coconut milk went with me to our fancy anniversary dinner so I could have coffee afterward.  It was all little changes that weren't a big deal but required some forethought.

Did you feel better and/or lose weight?

Yup, I felt a ton better - I was no longer getting sleepy mid-afternoon, feeling like I needed coffee or a nap to pick me up.  I just had more energy overall, which I had been lacking for several years.  And even though it's not the point of the program, I did lose those last pounds, too: about half in that first month and the rest over the next 3 months that I continued the program.  My husband and I felt so good - he was sleeping much better and stopped getting migraines - that at the end of the 30 days we just decided to keep going.  Once you have your food systems in place and you know what you can and can't eat, it's really easy to maintain.  Like I said in yesterday's post, I fell off the wagon during our vacation, but he's pretty much (with occasional cheats) going strong.  I really wish I had kept going, or at least got right back on it because I know I felt a lot more energized.

I couldn't do it.

This is the statement that stuck with me the most, for two reasons.  First, I didn't think I could do it, either.  I love and crave sugar, and I also drink a lot of tea, and I was putting a spoonful of sugar in each cup.  I couldn't see how I was going to drink tea without sweetener.  But I did it, and I haven't had sugar in my tea since. I just don't miss it and it wasn't even hard to adjust to when I first started.  And I thought, how am I not going to eat, like, dinner staples??  Well, you find a way around it and make the things you can eat super delicious.  You quote Tim Gunn and make it work!

Second, and here's some tough love coming: you can do it, you just don't really want to.  I know you don't want to give up cheese, but you can.  I know you don't want to give up bread, but you can.  That glass of wine you have to unwind at night?  You can give that up, too.  You can actually do it and it doesn't hurt you one bit.  No, it's not fun to cut out all the fun foods and treats, but if you're unhappy with how you look and particularly how you feel then it's totally worth it.  Do you like yourself or ice cream more?  Are you happy with low energy or would you like to make it through the day without yawning at 2pm?  If you really want to, you can.

My husband and I didn't even realize how much our food was affecting us until we stopped eating things and we felt so much better.  And it's only 30 days!  If, after that period, you want to add back some foods, you can - you are just supposed to do it slowly so you see how they make you feel. (My husband is not a big beer drinker, but would have one if we were at a party or out to dinner, and he actually felt horrible after the first beer he had at a work dinner after months of not having any.  Cheese is also not his friend, it turns out.)

So there you have it - my go-around with Whole30 and what helped get though it.  I'm glad I tried it, I'm pleased that I stuck with it, and I'm thankful to be doing it again, knowing that it's going to help me feel better again.  I'll be sharing my experience a little bit in my Instagram stories, and I'll be following along with Whole30 Recipes on Instagram for meal inspiration.  If you decide you want to try - you don't have to wait for January 1 to get started (or any first of the month really, if you just track your days) - let me know and I can provide some resources and suggestions.