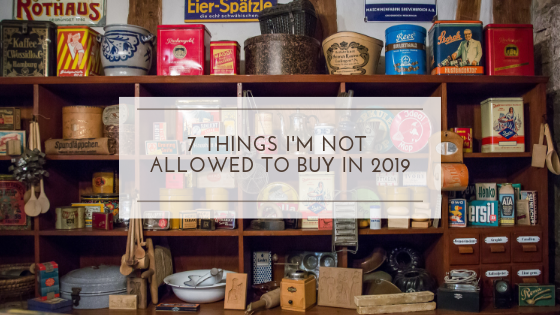 I was going through my list of previously published blog posts to remind myself what I used to write about.  Since I took a huge blogging break, I kind of forgot a lot of the posts that I previously wrote; some of them are so bad it made me laugh, and some are so interesting that I'm kind of impressed with myself for coming up with them.  I saw the title "7 Things I'm Not Allowed to Buy in 2017" and had to read what it said because what seven things did I have too much of and should't be able to buy more of??

1. 2017: "Tea. My cabinet is overflowing with boxes of various types of tea.  The problem is I have my favorites that I drink all the time - and there are several of those, and then there are the teas that I wanted to try and maybe didn't love or don't drink all the time.  I am not allowed to buy another box of tea until my supply is down to like, three types."

I can tell you that I have actively worked on this.  I used to have a stash in two different cabinets because I had so much.  I sucked it up and drank a lot of tea I didn't love because I hate wasting things.  I stopped buying teas that I maybe might like and am just buying the types I love (basically strong black English/Irish/Scottish breakfast teas).  I've also been eliminating teas with caffeine since I can't drink more than one caffeinated cup a day anymore, and I typically drink tea all day long.

2019: Sunglasses. I am a terrible sunglasses person, or at least I used to be.  I would regularly break or lose them, so I only bought really cheap pairs and made sure I had at least two, just in case.  I've gotten tons better and currently have four pairs.  I do wear them all and rotate through them, but I always try them on at Marshall's even though I don't need more.

True - I don't drink it that often.  I like a cup of decaf after dinner, like dessert.  I don't drink it in the morning unless I'm out at a restaurant so I don't need more than one bag.  I'm down to three partial bags - two are caffeinated and I may just get rid of them for how much is left, but as I said, I hate wasting things.

2019: Jewelry. I don't wear fancy jewelry, so it makes it easier to accumulate if it's not super pricey.  I have more than enough of anything I would want to wear so I can't justify new pieces.

3. 2017: "Candles. I love a good candle.  Hand me an evergreen scent, or my new favorite - anything with sandalwood/teak/tobacco in it - and I'm going to buy it like the sucker I am.  No more until the ones I have are used up."

This is also still very true but I have also actively worked on using what I have and can say that I am only storing one partially used candle at the moment because I had burned evergreen candles throughout December.

2019: Nail Polish. Between my daughter and I we have at least 30 different colors.  Who needs more than that??

4. 2017: "Art supplies for the kids.  Maybe it's because we just had Christmas, and maybe it's because I just organized it all for the third time this week, but no more crayons, markers, colored pencils, Perler beads, or stickers.  None!  They can get new paper, though, or else we'll never use this stuff up."

Failing miserably.  Well, sort of.  When we get new supplies they tend to come at birthdays or Christmas and then they come in multiples, which happened this past year.  We did, however, recently weed through all markers, crayons, colored pencils, and stickers and donated a huge bag of supplies to a teacher in need.  There's still a lot to use up but now that it's back in my sights I'm going to focus on using more up.

2019: Legos. We had a moratorium on Legos for awhile because they were out of hand but they've slowly been allowed to purchase new sets.  100,000 Lego pieces later, it's complete chaos.  Unless we sell off existing sets, no new Legos.

5. 2017: "Clothes for the kids. My children are the best outfitted duo on the planet.  They could easily go for at least two weeks and not run out of new things to wear, and that needs to stop because it is unnecessary.  Unless their shoes don't fit or they have a huge growth spurt, no new clothes!"

2019: Scarves. I have a bunch of blanket scarves that I love to wear in the winter but I do not need more than I already have no matter how pretty the color combinations are.

6. 2017: "Paper goods. Oh, paper, how I love thee.  List pads, thank you notes, journals, planners.  I am a sucker, again, especially when it's reasonably cheap at Home Goods.  Granted, I do use these things on the daily, but not enough to warrant buying more."

Let me tell you about my love for Home Goods.  Home Goods has the best, most fun stuff and I can't resist it.  I have not bought any of those things in the past six months with the exception of a planner that I love (finally found one that I use all the time) and journals for the kids to use for writing gratitude.  But don't be fooled that I don't peruse them every. single. time I go in there.

2019: Mason jars. We use Mason jars for everything in this house.  We use them as glasses, we store dry goods in them, we store sauces in them, we display knick-knacks in them.  We have all different sizes and a ton of extras in the basement.

7. 2017: "Mugs. At the end of 2016, between craft shows and Christmas, I managed to pick up four or five new mugs, on top of the million I already have.  I use them every single day, but I definitely have my go-to favorites while the others get pushed further back in the cabinet.  Not another one, 2017!"

I don't know how I did in 2017 but in 2018 I bought three handmade mugs between October and December.  It's so hard to work at craft shows and not come home with things.