I saw a post on A Bird in the Hand Art the other day talking about things about me, and I thought it would be a lot of fun to give it a try.  I kept mine to my crafty life, since, as you see below, it says "Craft:"  Here goes!﻿

One Project You Are Particularly Proud Of

I've showed this one off before, but it would have to be that Gardening Chest cross stitch, just because it took so darn long and it came out so good.  I'm proud that I stuck with it and actually got it done, even though it took close to a decade! 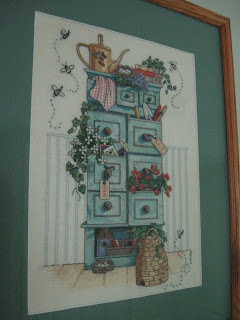 Two Mistakes You've Made in the Past

1. I once sent out a package to a customer of something I wasn't entirely proud of.  There wasn't anything wrong with the items, per se; they just were slightly different from what the picture showed, and I realized it before I sent it and did it anyway.  Not my proudest moment, it still kind of haunts me, but it was a good learning experience in what not to do again.

2. This one is silly: I always start a cross stitch project, generally make a mistake somewhere, and then put it away when I get frustrated.  Then when I take it back out again, I'm in a better mindset to start again.  I took out this pattern and I couldn't figure out where to pick up with it.  Nothing lined up with the pattern.  I couldn't figure out where to start, and the section I had done all had similar colors.  About a half hour later, I realized I had the hoop with the fabric upside down.  It all worked out after that.

1. Offering bookmarks for different uses, like table favors, party favors, and announcements.  There are a lot of people who love to read and appreciate books, and bookmarks are a classy gift to give!

2. I'm not a graphic designer, so that can be limiting at times, but I think that forces me to try and use paper and fonts in different ways instead of just using graphics.  Though there are times when I wish I could just draw out what I want on the computer!

3. Trying different techniques.  I recently listed bunting cards that have a sewn line of string on them.  That is something that was new to me, but it gave those items that I used it on another dimension.

Four Tools You Love to Use

1. Bone Folder.  I love having one end to score paper and the other to help make a nice sharp crease.  This helps make my bookmarks look sharp!

2. Rotary cutters.  I have a desktop one for paper and a hand-held one for fabric and they make cutting so easy and really help keep lines straight.

4. My Scotch ATG.  I got the one at Michael's at 40% off (yay coupons!) and it is so easy to use.  It saves my fingers from getting stuck to the double-sided tape (which I do still also use).

1. My customers.  I have things listed in my shop, but occasionally I'll get a request for something custom in this color mixed with that color, and it always turns out looking neat.  Then I want to make something in the same color vein for myself.

2. My friend Adrienne at Admire Design.  My oldest friend is a wedding invitation designer and sometimes when she gets busy I help her assemble her great creations.  Then after staring at color combinations for hours, I will often take what I see and make something out of it myself.  The 150 bookmarks is an example of that, the combination of which came from a 200+ invitation suite.  Plus, it helps that she let me raid her scraps stash and will pass along smaller, unuseable pieces of paper for me to use as bookmarks. 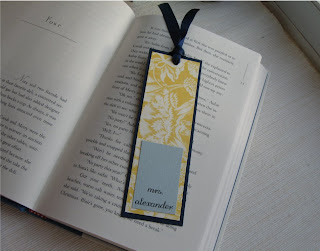 3. Paper!  Sometimes I'll see a sheet of paper in a store and just get an idea of something I could do with it.  These moving cards were an example of that.  I loved all the suitcases and bags and thought they were be great as a backer for "Hey, we're moving!" cards. 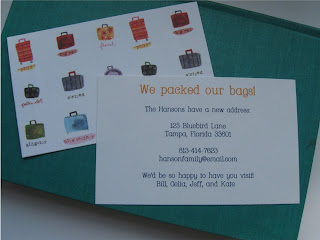 4. Pinterest.  I have found more ideas on there than I know what to do with.  Literally.  I think I have something like 45 sewing projects pinned right now, and you know where I'm at with sewing (straight lines, anyone?).  For my shop, I've seen a lot of ideas that I would like to try, but I also see ideas and combine parts of them together, or take an idea and change it into my own thing.  I love having a jumping-off point, especially if I get stuck.

5. Etsy.  There are some amazing people on Etsy, with some amazing ideas.  If looking through listings doesn't give you some ideas, I'm not sure what will.  A lot of times I'll get an inspiration while making a treasury, either an item I see that I want to tweak as my own, or a color combination I'm using that I want to try myself.  It's a great place to find ideas.

So there you have it!  If anyone wants to take this and give it a try, let me know- I'd love to read them!
Labels: by the book paper crafts etsy pinterest