Have I mentioned before how much I love Pinterest?  I think it's so much fun to find things on there to admire and maybe even decide to try one day.  One of the boards I've got going is Food.  Who doesn't want to find new recipes to try out??  There are some amazing-looking dishes out there, and most of the ones I've pinned involve bread or cheese in one form or another.  On Monday I finally decided to give one of them a try: Outback Steakhouse Brown Bread. 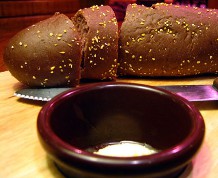 When my husband and I used to go out to dinner together a lot, we would often frequent Outback, and their bread is just the best, so I was really excited to find this recipe.  It involved a few ingredients I don't usually use- rye flour, molasses- but I figured if it was good bread, I'd end up using them up making multiple loaves.  The recipe is fairly easy, though you do have to have time to make it in order to let it rise twice.  It tells you to form it into two loaves, but I only formed it into one.  It didn't look like it would get too big, but it did when it rose, so I suggest following what it says and make two out of it.

It was really good, and I made some honey-butter to go with it to try and mimic the sweet butter you get at Outback, but honestly, neither tasted like what you get at the restaurant.  It is definitely a good bread- hearty, thick, really tasty, but not quite the same.  (I'm sorry, I don't have an after picture.  I took one, but it is lost somewhere.  I'll probably find it on the computer next week sometime.)  Give it a try if you like to make bread and want to try something new, but don't quite give your hopes up that you'll never have to go to Outback again.

I'm going to keep going on trying the recipes I've pinned (because while I LOVE my Things to Try board, some of that stuff is a little more labor-intensive to me than cooking).  Here's my Food board.  What do you think I should try next?
Labels: recipe